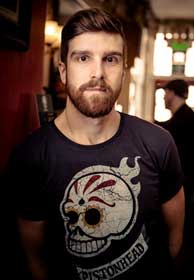 Growth expands coast to coast down under

PERTH, WESTERN AUSTRALIA, November 1, 2018—Barmetrix is pleased to announce  Tyron Bayliss has partnered with Barmetrix, the hospitality industry’s leading consulting firm in one of four offices now operating in Australia.

Tyron was born and raised in Perth, but discovered his love for hospitality after moving to London following his dreams of  career in music. While traveling Europe as a drummer, Tyron worked his first bartending gig at a well-known blues bar in London.

Progressing through the ranks from supervisor, manager and then GM of a craft beer venue, Tyron developed a passion for not only craft beers, but spirits, cocktails and training, and team development.

Ray Walsh, Barmetrix COO stated, “As a Barmetrix partner, Tyron brings with him not only hospitality experience, but a real passion for the industry and for helping bar and restaurant operators in his hometown of Perth become more stable and profitable. We’re excited to have him be a part of our growing network.”

Barmetrix is the leading hospitality services and consulting company. From a small business concept started in 1999 on a kitchen table in Sydney Australia, we have coached over 5,000 bar/restaurant operations teams on three continents in four countries around the world. In a nutshell, Barmetrix provides expertise in solving some of the most common issues in hospitality businesses worldwide today.