First Taste Of Potatopia, The Tater Restaurant Of Your Dreams 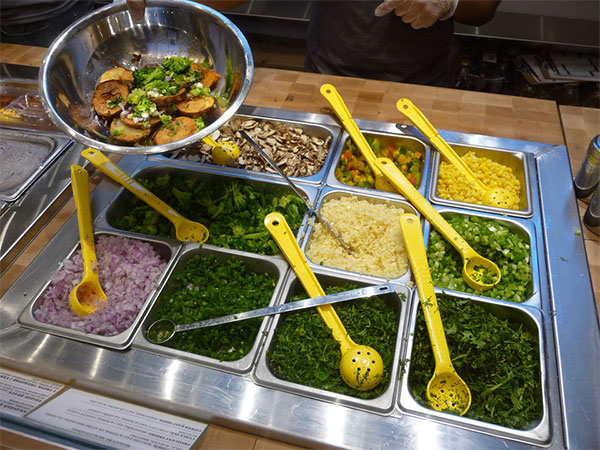 Nell Casey/Gothamist -Three months after it dangled the curly fry in front of our dilated pupils, Potatopia has finally opened its doors to seduce us into a food coma. A spinoff of the original in New Jersey, the West Village restaurant offers myriad potato dishes, from regular french fries to potatoes au gratin, that diners can customize with dozens of toppings, cheeses, meats and sauces.

Owner Allen Dikker guided us through the Signature Meals: potato combinations he created and a good place for newbies/indecisive eaters to start. The Comatoser, an aptly named gut-buster using the fried potato rounds, was a favorite of the bunch, offering a great bacony flavor, perfectly cooked broccoli and a totally boss roasted red pepper sauce. The flavorful Curly Sue also pleased, topping crisp, well-seasoned curly fries in a garlicky bath of parmesan and pepperjack cheeses and chipotle ketchup.

We found an unexpected hit with a customized au gratin dish. Expediting a baked potato casserole-type dish in three minutes is impressive on its own, and the restaurant also manages to pack in lots of buttery flavor balanced out by a generous sprinkling of black pepper.

Make no mistake: this is not a diet food nor an I-have-to-do-anything-in-the-next-hour food. But it's a perfect splurge when you're super hangry or, even better, when you really tied one on the night before and need a wicked dose of potassium and cheese to level out your system. But since you can control the ingredients, you can steer a dish into diet-and-Paleo friendly territory by using a baked sweet potato and loading up on veggies and the lean, all-natural meats. Dikker reveals he's adding a meat-free protein to the mix sometime in the near future—most likely a seasoned seitan—but even without it, vegetarians and vegans should have no problem filling up on the taters and seasonally-rotating cast of veggie toppings.

You'll find no complaints from us about the quality or taste of the ingredients; it's clear Dikker knows his concept and has found a great way to execute his dishes. If there's a gripe to be found it's the space, which only allows for 12 diners to sit at one time. Given the need for the meals to be consumed as soon after cooking as possible, frantically searching for a chair with a steaming mass of cheesy potatoes in your hand isn't a great beginning to a meal. But don't let a small space deter you—we're used to cramped quarters, after all! It's well worth a visit to potato heaven even if you have to throw a few elbows to get there.