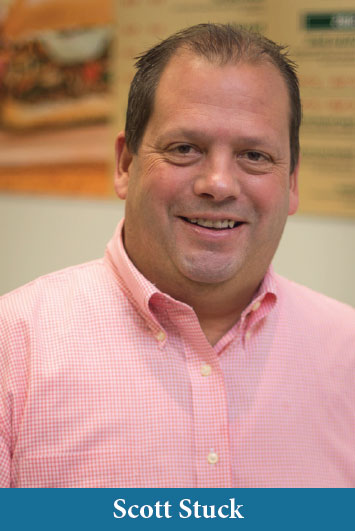 Jon Smith Subs has hired Scott Stuck as its president, according to a company press release. The brand, which was acquired by United Franchise Group last year, has eight units and was searching for a leader to help it increase its footprint. The group found Scott Stuck, who is also the brand’s first franchisee, opening his own store in August in Stuart, Florida.

“I know this is rare, I may be the only one who has done this,” Stuck said, “but as I delved more into the brand while buying the Stuart location, and more into United Franchise Group, I was convinced I could really drive this brand forward. And being the first franchisee gives me the unique experience of understanding exactly what franchisees will need to do to get open, operating and profiting straight away.”

Stuck started his career in hospitality at age 10, working at his father’s Big Boy franchise. After college, Stuck was a  manager of a Bennigan’s to learn even more about the industry. He then worked for Brinker International managing and eventually opening several units for the brand.

From there, Stuck’s career consisted of a multitude of franchise experiences from partnering in Miller’s Ale House franchises and becoming president and equity partner in a multi-unit owner group overseeing several locations of Rock Bottom/Old Chicago throughout the Midwest to working with Einstein Bagels.

“This brand can really grow”, Stuck said about Jon Smith Subs. “It’s a premium quality product yet an affordable sandwich restaurant. There is nothing else like the flavor profile in a Jon Smith’s sub. We use only high-quality ingredients, cooked up fresh on the grill and served with an order of award-winning French fries.”

The first 25 franchised Jon Smith Subs locations have already been sold and will open throughout Florida, Connecticut, California, Nevada, Ohio and Virginia. About 25 more locations are expected to be sold by the end of the year in the United States with plans to expand globally beyond that.

“We have the systems and people in place to provide site research and set up assistance, marketing and ongoing support,” Stuck said.


The cost to open a unit ranges from the low $300’s to the low $400’s, Struck said.
“In most cases, we have financing available (for about) 60-75 percent, making your initial investment $125,000-$150,000,” he said. “We also offer area developer opportunities for multiple units from city, regional, to statewide and master licenses are available outside of the U.S.”