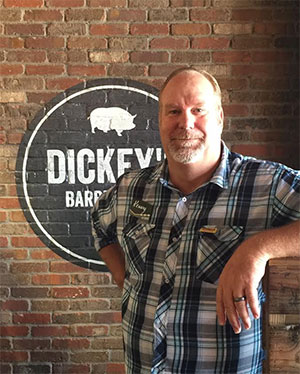 Dickey’s has executed a development agreement for two new stores in South Texas
(San Marcos, TX) Dickey’s Barbecue Pit is expanding in South Texas with two new locations slated to open in New Braunfels and San Marcos. The first location in New Braunfels will open at I 35 and FM 306 in Fall 2016. The San Marcos store will follow in 2017 with the location to be determined.
“Dickey’s Barbecue Pit is continually expanding throughout our home state,” says Roland Dickey Jr., CEO of Dickey’s Barbecue Pit. “We are proud to increase our presence in South Texas with these two new stores.”
Previously a manager in the oil and gas industry, Owner/Operator Kenneth Elliott has many years of experience in lean operations management. He has always been passionate about superior customer engagement, so Dickey’s Barbecue Pit was the right fit when the opportunity to invest in a franchise arose. “I’ve been a fan of Dickey’s my whole life,” Elliott says. “When I moved to South Texas I realized there was a need for Dickey’s on the I 35 corridor between San Antonio and Austin. I am thrilled to have the opportunity to bring Dickey’s quality barbecue to New Braunfels and San Marcos.”
About Dickey’s Barbecue Restaurants, Inc.
Dickey’s Barbecue Restaurants, Inc., the nation’s largest barbecue chain was founded in 1941 by Travis Dickey with the goal of authentic slow-smoked barbecue. Today, all meats are still slow smoked on-site in each restaurant living up to the company tagline, “We Speak Barbecue.” The Dallas-based family-run barbecue franchise offers a quality selection of signature meats, home style sides, tangy barbecue sauce and free kids’ meals every Sunday. The fast-casual concept has expanded to more than 560 locations in 43 states. This year Dickey’s won first place on Fast Casual’s “Top 100 Movers and Shakers” and ranked in the top ten of Franchise Times’ “Fast and Serious.” Dickey’s Barbecue Pit was recognized for the third year by Nation’s Restaurant News as a “Top 10 Growth Chain” and by Technomic as the “Fastest-growing restaurant chain in the country.”