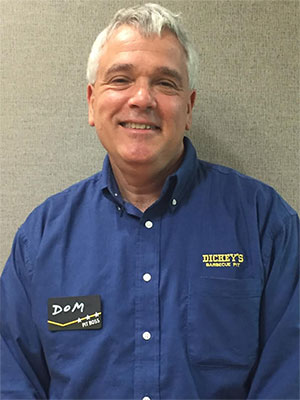 Dickey’s has executed a development agreement for three new stores in Mississippi
(Greenville, MS) Dickey’s Barbecue Pit announces expansion into the Mississippi Delta. The three new locations will be the first in the Mississippi Delta. The first store will be located in Greenville, and will open by the end of 2016. The additional locations will open in Cleveland and Greenwood, with timeline to be determined.
“Dickey’s Barbecue Pit is proud to expand into this new area,” says Roland Dickey Jr., CEO of Dickey’s Barbecue Pit. “The South is known for its appreciation of great barbecue, and we look forward to bringing our Texas-style flavors to the Mississippi Delta for the first time.”
Owner/Operator Dominick Trinca was born and raised in New York, but moved to Mississippi in 1994 after getting married and practiced medicine for 20 years there. Having always wanted to open a restaurant, Trinca decided to take the leap into franchising with Dickey’s Barbecue Pit after researching the brand thoroughly. He tasted the food and knew he wanted to serve Texas-style barbecue to his community. “I knew my community needed a new Fast Casual option,” Trinca says. “This area loves barbecue and I believe the brand is a great fit for my family because of its support system and excellent quality.” Trinca hopes to leave his restaurants as a legacy for his three sons.
To find the Dickey’s Barbecue Pit nearest you, click here. Find Dickey’s on Twitter,  Facebook and Instagram.
About Dickey’s Barbecue Restaurants, Inc.
Dickey’s Barbecue Restaurants, Inc., the nation’s largest barbecue chain was founded in 1941 by Travis Dickey with the goal of authentic slow-smoked barbecue. Today, all meats are still slow smoked on-site in each restaurant living up to the company tagline, “We Speak Barbecue.” The Dallas-based family-run barbecue franchise offers a quality selection of signature meats, home style sides, tangy barbecue sauce and free kids’ meals every Sunday. The fast-casual concept has expanded to more than 550 locations in 43 states. This year Dickey’s won first place on Fast Casual’s “Top 100 Movers and Shakers” and ranked in the top ten of Franchise Times’ “Fast and Serious.” Dickey’s Barbecue Pit was recognized for the third year by Nation’s Restaurant News as a “Top 10 Growth Chain” and by Technomic as the “Fastest-growing restaurant chain in the country.”