AAMCO Franchise Continues to Evolve as a Best-Bet Investment

After more than half a century as one of America’s most iconic franchise systems, AAMCO continues to drive toward a bright future. Led by an executive team that is entirely focused on improving the business model for its growing network of franchisees, the AAMCO of today is a forward-looking, tech-savvy powerhouse that is rapidly expanding across the country.
What makes AAMCO stronger than ever? In recent years, AAMCO has honored its storied legacy of being a dynamic part of American car culture by fully embracing the technological advancements of the 21st century and applying them to its time-tested business model. This dedication makes AAMCO franchises easier to run and easier to scale than ever before.
AAMCO has invested in a state-of-the-art initial and ongoing training platform called AAMCO University, which not only has made AAMCO accessible and welcoming to entrepreneurs without experience in the auto industry, but has given technicians and employees at AAMCO franchise centers the ability to move upward in their careers. This has allowed AAMCO to retain its hard-won expertise in the auto repair industry and has made it easier for franchisees to hire and retain the best talent.
The brand also successfully launched Total Car Care. AAMCO has leveraged its 50-year history of fixing the most complex part of the car, the transmission, into a full-service offering that includes brakes, oil changes, heat and A/C and brakes. In 2018, the brand will add tires. This level of service and consumer trust — combined with an ongoing initiative to “win the internet” through a series of marketing efforts, a new financing program for consumers, and a new POS system — has delivered to the AAMCO franchisee multiple revenue streams and the ability to out-compete auto repair chains in their markets.
The industry agrees. In 2017, Entrepreneur magazine included AAMCO on their prestigious “Franchise 500” list and ranked AAMCO as the No. 1 brand in their category for the third consecutive year. Based on network size, growth rate and financial strength, the brand also earned a spot on Entrepreneur’s “Best of the Best” list. Additionally, AAMCO has been ranked on the Franchise Times Top 200+ for the past two years.
Existing AAMCO franchisees agree. The investments that AAMCO has made to improve its business model allows existing franchisees to open new centers in record numbers. If the measure of success in a franchise system is its franchisees answering this fundamental question in the affirmative: “If you could go back in time, would you make the investment again?” — then AAMCO has knocked the ball out of the park. 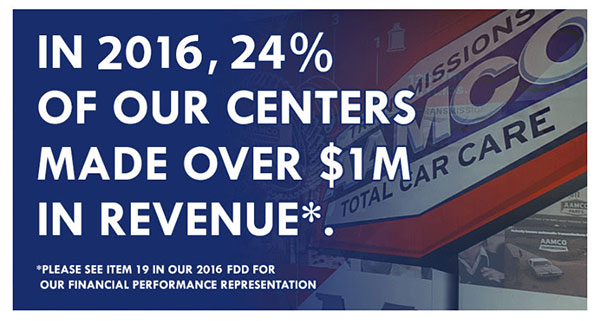 Want to learn more about AAMCO?

With nearly 700 locations across the country, AAMCO is ramping up for a rapid nationwide and international expansion. The AAMCO franchise is committed to innovation and trusted in the eyes of the American consumer. Interested candidates should have a minimum net worth of $250,000 and liquid assets of at least $65,000 per unit. Depending on the real estate selected, franchisees can expect the total investment to be approximately $227,400 to $333,000, with an initial franchise fee of $39,500. Reduced franchise fees are available for honorably discharged veterans.
To learn more about AAMCO, please click the link below.
0
Add Franchises To Basket<br /> For Free Information
Request Free
Information